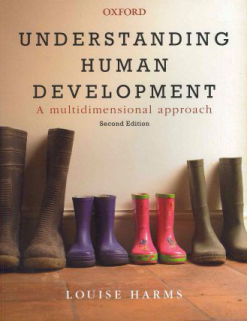 ster, one of my units is Social Work Across the Lifespan, a particularly useful class that assesses the ways in which humans develop from birth to end of life. The course has thus far focused on a multidimensional framework for social work, with the apt assigned textbook: Understanding Human Development: A Multidimensional Approach, by Louise Harms.1 Harms is an associate professor and the Deputy Head of the Department of Social Work at the University of Melbourne, with multiple books under her belt. In my first semester, an assigned text was another of hers: Working with People: Communication Skills for Reflective Practice. Suffice to say, I’ve become well acquainted with her approach to social work, writing style, and research interests.

For this post, I will review the current text of hers that I am reading: Understanding Human Development.

I particularly enjoyed the first half of the book. In the first chapter she discusses what she means by a multidimensional approach, highlighting that “no single theoretical perspective can adequately account for the diversity of individual experiences” that a human goes through across their life course (p. 31). I appreciate this post-modern stance, and in chapters 4, 5, and 6, she further discusses this idea, positing that our individual experiences of stress, trauma and loss shape the ways in which we develop and exist.

The other aspect of the multidimensional approach, overviewed in chapter 1 and covered more in-depth in chapters 2 and 3, are the ways in which human lives are impacted contextually by the unique psychological, relational, social, structural and cultural dimensions within which they are situated.

In the psychological dimension, “how we think and how we feel emotionally influences every aspect of our daily experience” (p. 7). In the relational and social dimensions, family, neighbours, extended networks, schools, local GPs, and so on “provide context for our … well-being and identity, and … our survival” (p. 12). In the structural dimension, government and politics either support, ameliorate, or inhibit functioning, such as local council, health care policy, public transport, education policy, housing, etc. In the cultural dimension, beliefs, norms and ideologies specific to one’s location impact the way we make sense of our lives and the meaning we create, either collectively or individually, regarding identities and experiences.

Chapters 7-13 each individually cover the stages of life: infancy, early childhood, middle childhood, adolescence, early adulthood, middle adulthood and late adulthood. While in the first chapter she posits her critical stance regarding many researcher’s normative assumptions of life stages, she then goes on to outline arguably normative perspectives on development in these chapters. I should mention, however, that she redeems the latter in the final chapter, “Drawing the Themes Together,” where she outlines the ‘critical dimensions’ of her book. Here, she argues that “questions arise as to the evidence-base for some of these theories, as they are sometimes derived from small samples or ones that are culturally, racially or gender biased,” and goes on to state that often uncritical cultural assumptions are inherent in research methodologies (p. 394). Despite that half of the book is devoted to outlining each life phase, I found these chapters somewhat dull; the content came across as superficial, banal, and I struggled to get through.

Overall, I have the following criticisms:

Despite the above criticisms, I really appreciated that across the entire text, she focuses on contextual risk and protective factors, resilience and coping. She analyzes in-depth the ways in which unforeseen and uncontrollable adversity initiate challenges for people – either temporary or ongoing – yet she buffers this by assessing how we are able to transcend adversity in unique, beautiful ways. Focusing on the often awe-inspiring ability of people to keep living their lives amidst threat, violence, loss, tension, hardship, and the other myriad forms of duress, gives immense hope to this burgeoning social worker.

With an undergrad in sociology and a propensity for research and writing, Mara started blogging to create a space to share ideas and communicate with other sociologically-minded humans and social workers, more generally. She practices critical thinking on a daily basis, whether it be naming heteronormativity when straight people exercise taken-for-granted privileges denied to LGBTQ folks, or noticing covert racism when ballet tights are advertised as 'flesh-toned', yet are always pink. Alongside her passion for academia, she enjoys long blacks with a dash of cold milk, building her ukulele skills, and making her own clothing. View all posts by Mara Bennett